Hillary is out there telling meager crowds that Trump has made no contribution to America because he offset losses that allowed him to pay no taxes for a few years. The fact is every business, every person who gets hit with a loss can carry over the loss against future earnings. It is an American tradition and not a “loophole” of the rich. What Hillary is doing is what has become a staple cry in the Democrat playbook – CLASS WARFARE. It’s in reality, demonizing the rich, the successful, the job creators. The winners in today’s society didn’t get there by their own hard work and ingenuity, says the Left. They got where they are by stealing from the poor. They don’t pay their fair share. They must be punished. Again, this is class warfare right out of Karl Marx’s manifesto.

Joe the plumber uses it. He gets a $50,000 loss in his business, for whatever reason, and he gets to carry over his loss as a deduction against future profits. John Q. Citizen has no flood insurance and loses a house worth $200,000. John Q. gets to carry that loss over against future earnings. It is a sacrosanct means for American citizens to get back to zero again. In the case of Trump this tax deduction allowed him to go on to provide thousands of jobs for citizens. Nobody that I know seeks to pay more taxes than they have to.

The Democrats did the same thing to Romney in 2012.

The New York Times, who illegally released Trump’s tax returns,  should be red in the face because they also have used this tax “loophole” AS HAS HILLARY AND BILL ALSO.

So who sent the NY Times Trump’s confidential information. Best guess is the IRS which has been politicized under Obama. Remember its persecution of Conservative and Christian organizations?

Unfortunately, this topic will be the top question in the upcoming Presidential debates we have left.

See, when the New York Times breathlessly reported that Donald Trump used the tax code to claim a business loss, which would enable him to not pay taxes for several years, it instantly became the big “October Surprise.”

The rest of the media, leftists and the Hillary campaign – especially the Hillary Campaign – jumped all over this story. 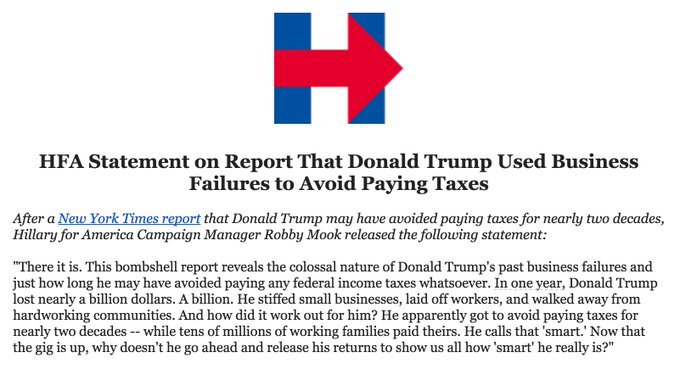 Trump “apparently got to avoid paying taxes for nearly two decades—while tens of millions of working families paid theirs.”

Then we find out that The Times also used a similar scheme to avoid paying federal taxes too. Which kind of makes them hypocrites, right?

Now we discover that none other than Hillary Clinton herself also used a federal tax break in 2015 to claim a loss and avoid paying taxes.

Of course, Hillary’s claim of $700,000 is dwarfed by Trump’s near-billion dollar claim, but remember how incredibly wealthy Trump is (or isn’t, depending on when you ask).

Bloomberg Magazine wrote bout how incredibly common this federal tax break is among the very wealthy.

Those 1.1 million folks in the 1 percent, as measured by the TPC, have annual income that averages a little less than $700,000. The top one-tenth of that group, some 110,000 households, average about $3.6 million, according to Howard Gleckman, a senior fellow at the TPC.2

Among the biggest of these givebacks, courtesy of the Internal Revenue Service (well, really Congress), are capital gains and dividends—these are the biggest way the wealthiest benefit.

In other words, their post-tax profit was higher than their pre-tax profit. The explanation in their 2014 annual report is, “The effective tax rate for 2014 was favorably affected by approximately $21.1 million for the reversal of reserves for uncertain tax positions due to the lapse of applicable statutes of limitations.”

If you don’t think it took fancy accountants and tax lawyers to make that happen, read the statement again, Forbes writes.

So there it is. Donald Trump did exactly what every other wealthy person and corporation in America does.

And Hillary Clinton wants you to think Trump is a cad while she profits from exactly the same thing.

Most people do, particularly startups — and the real story is what happens. What do they do?  Do they come back?  Do they wallow in it?  Do they find a way to rebound or what have you?  There are inspirational stories. I’m sure you could tell an inspirational story about how you recovered from these bad years that you’ve had.  Everybody has them. Everybody that takes a risk.  And look, I’m sick and tired of the Clintons, particularly — and the Democrats — getting away with demagoguing these things that are not errors.

Where is the outrage?  Nobody even cares to report it.  That capital loss, she’s allowed to carry that forward and it will affect how much income tax she owes in future years.  Same thing that we’re dealing here with Trump.

But in our corrupted politics of today, something like this is now portrayed as scandalous.  And I say this without regard to the fact that Trump is involved in this.  I’m not saying this just to defend Trump.  This is the kind of thing that’s happening throughout our culture.  What used to be considered tremendous human character and characteristics is now being portrayed in all too many instances as fraud, thievery, some kind of character defect.

And who is it that’s doing these characterizations?  Corrupt politicians are doing it and their enablers.  Why is there a carryover tax loss law?  Why does it exist?  There’s a reason for it.  And you know the primary reason for the carryover tax loss is?  Jobs.  Without this, without the ability to carry over losses into future tax years, more businesses would fold.

The entire idea of the carryover is to recognize the risks of owning a business amid economic downturns, fluctuations. Without some recognition of bad times hitting businesses — sometimes from changes in the tax code, sometimes a recession — there could be mass layoffs far more often. You would have business failures left and right if these accommodations weren’t made.  These laws exist in many cases for reasons.

Some of the reasons are not good and honest; some of them are the result of corruption, too, but this one isn’t.  Actually, in the old days — if Trump were not running for office and he were not a Republican — this would be looked at as a very redemptive story, and it’s the reason he wrote the book The Art of the Comeback and how he did it.  You know, without redemption, Hollywood wouldn’t exist.

But now because the subject matter in this instance happens to be seeking the presidency as a Republican, why, all that feel good stuff? Nah-nah-nah-nah. We can’t permit that.  Trump was dead broke.  He was a billion dollars in the red.  Remember Mrs. Clinton? She was whining and moaning that she and Bill left the White House “dead broke,” and that’s why they stole some furniture from the White House on their way out, and that’s how they justified everything since.

“We were dead broke when we left the White House.”  Why?  “Well, legal fees and any number of things.”  Well, Trump had the same thing.  So why do the media not praise Trump for coming back from being dead broke and using the loved and adored tax laws — our brilliant tax code — in order to maintain jobs, to build a stronger company that goes on to create even more jobs?

Over here’s Mrs. Clinton taking $22 million in two years for flapping her gums for 20 minutes at a time to a bunch of banks, and they want to tell me Trump is greedy?  Trump is greedy?  How many jobs has Hillary Clinton created with these speeches that she gives?  You know, this is just… It’s maddening the way this stuff gets twisted and turned by a bunch of already corrupt people who then get to try to portray themselves as clean and pure as the wind-driven snow.