RUSH: Ladies and gentlemen, I want to expand on something here that I just saw President Trump say right before the end of the previous hour. He said that his plan now is to just let Obamacare fail. He’s not gonna own it. He’s just gonna let it fail. Which he’s been saying for months. He said, you know, the smart thing politically for him to do be let it fail and let the Democrats absorb all the blame. Let Obama and the Democrats take the blame. Just let it fail. But Trump said — as a show of good faith — he was gonna work with people to try to replace it, to repeal and replace it rather than just to let it implode, let it fail.

Now, we know that the Trumpster engages in The Art of the Deal at all times, and so this statement of his, which was stated in… It looked like he was in the Cabinet Room. Pence was sitting next to him. A lot of people were there. All the media camera shutters were clicking and flicking there, so this got a wide audience. “I’m just gonna let it fail. I’m not gonna own it. I am not gonna sit here and own this. If this is the way it’s gonna go, I’m just gonna let it fail.” He could be negotiating; he could be serious.

He could mean it that he’s just going to sit by and let the thing fail, and that means old Mitch and the boys can go in there and fail to repeal it and that means Obamacare remains the law of the land. This is where it gets interesting. Obamacare is imploding. It is in the process of consuming itself. If Trump follows through and just says, “I’m gonna let it fail,” and we just sit by and watch premiums go up 45, 50% every year… As we watch insurance companies pull out of the exchanges, as we watch the subsidies end, as we watch the exchanges close, as nobody’s able to buy insurance…

You have the Trump opposition in the, quote, unquote, “elite club” known as the establishment.

What are they gonna do now? See, the objective in the original design of Obamacare was to fail. But it was supposed to fail with Hillary Clinton or another Democrat in the White House. And, at the moment of failure, it was then to be suggested almost as a brilliant spur-of-the-moment idea, “Hey, why don’t we just go single payer.” Or, “Hey, why don’t we just put everybody on Medicare? Hey, problem solved!” Because, at that time, that point in time, premiums would be out of reach, deductibles out of reach, insurance companies closing down and closing up shop, exchanges closing up shop. So it’d be eagerly demanded, even maybe by the public.

But now we’ve got Trump who doesn’t want to go single payer, and this the Democrats and the establishment know. So there are two options here, and it’s interesting to note that if you listen to the media and you listen to the Democrats, repealing Obamacare is the worst thing that could be done, but it isn’t. Staying with Obamacare and letting it implode is the absolute worst outcome here. Repealing it means you repeal it. You get rid of every Obamacare law, and that means you start over. But it also raises a question: At what point do you…? Where do you resume?

What do we fall back to?

If Obamacare is repealed and those laws are gone — there are no exchanges, there are no subsidies — then at what point in the past do we go back to? Well, it’s the Wild West, folks. It’s the Wild West. If we repeal it, it’s the Wild West, and then you’re gonna see the traditional manner and behavior of Washington kick into gear and start trying to craft something. This is the theory of the optimists at the vote failure yesterday and last night, that this exact scenario would result, and that the lack of any formal federal health care law (other than what might still be on the books that we’d revert to) will cause, will create the need for immediate legislative action.

Otherwise, it will be said that the insurance companies will once again be in charge of health care because they’re the ones that sell policies. And you can’t get coverage if you don’t have a policy, ’cause it’s so expensive, you can’t pay for it yourself. So that’s Trump’s ultimate… I don’t know if you call it “threat,” but that’s his negotiating position. “Okay. If we can’t vote to repeal this thing, I’m standing by and I’m letting it die. I’m letting it implode. I’m gonna let it fail, and it’s on the Democrats, and I’ll make sure everybody knows it’s on the Democrats. 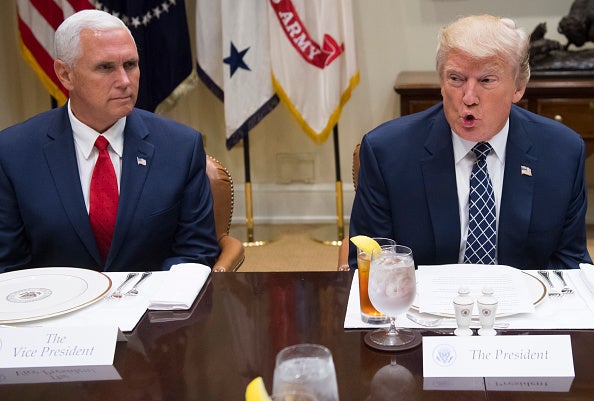 “I am not gonna own this sucker. It isn’t mine. I had nothing to do with it. I’ve engaged in good-faith efforts to fix this and people aren’t interested. So, fine. If you’re not interested, establishment, you live with the results.” I’m here to tell you: The results of Obamacare imploding are far worse than Obamacare being repealed.