“It’s beginning to dawn on many Americans that mayors, police chiefs and college presidents have no interest in stopping this violence. Left-wing officials sympathize with the lawbreakers, and the police, who rarely sympathize with thugs of any ideology, are ordered to do nothing by emasculated police chiefs. – Dennis Prager

The event had been in the works for months, a product of the leftists who are intent upon the destruction of every statue of former Confederate icons (Democrats all).  The rally protesting the planned destruction of a Robert E. Lee statue in Charlottesville had been issued a permit that was defended by the ACLU when the city tried to revoke it.

The locals — Governor McAuliffe, Mayor Michael Signer, and the police — had ample warning that a conflict was likely.  The ragtag smaller group of protestors with a permit saw neo-Nazi and white nationalist groups run to the front of the parade to claim leadership (with the full cooperation of the media), while the Antifa and Black Lives Matter counter protesters who did not seek a permit for their counter-demonstrations, have a recent history of violence.  Antifa, first and foremost, is known for particularly lethal violence, much more than the silly white supremacist groups that regularly show their ugly faces.

Pending the Department of Justice investigation, we do not know who initiated the violence in Charlottesville, but there is, as usual, a media backout on close examination of the violence clearly intended by the counter-protestors without a permit for their activity.  The unspoken law of the press is that every word reported must conform to their agenda; that would be the Democrat/leftist/media agenda that is of course anti-Trump.  The man could part the Red Sea and the left would attack him for interfering with the oceans.  That is how it is.  And it is not likely to change any time soon.

President Trump had nothing whatsoever to do with what happened in Charlottesville but the venal media and their cohorts in Congress on both sides of the aisle could not wait five minutes before blaming him for the violence.  Does that not feel like a set-up?   Just as in Berkeley, Ferguson and Baltimore, the police stood by as violent, masked, armed thugs attacked.   For one reason or another, riots and chaos were permitted furthering the cause of racial division.  This is the legacy of the Obama administration.  For eight years, Obama promoted racial conflict; he reveled in it.  He was proud of it.

The worker bees of the Democratic Party, leftist media CNN, NBC CBS, ABC, MSNBC, NYT, WaPo, LA Times, aided and abetted the skullduggery of the leftists, who want nothing more than to bring Trump down, to see him impeached.  They are shameless and completely immoral in this quest.  The violence in Charlottesville is a perfect example.  A hoard of mentally ill people, small in number but ripe for media exploitation, act up like the morons they are.  The local police stand down and let them do their thing. It will be good for Gov. McAulliffe’s presidential ambitions.  These thugs will behave badly and the left can use it.  A woman died and others were injured.  It will work to the benefit of the left.

It should be unimaginable, how vile and amoral the leftists are today.   They are ready, willing and able to mount any smear campaign, indict any innocent conservative, slime any person wrongly if it furthers their agenda, to bring down Trump.   The Saul Alinsky left has taken over the Democrats and it is a tragedy.   This lot is prepared to torch the country to take him down because he won an election.  Sadly, they have many collaborators in the Republican Party.  These anti-Trumpers misjudge Trump’s base so grievously.  That base really is made up of Americans who just want to make America great again.  They will not be fooled by the absolute nonsense that is “Trump is to blame for Charlottesville.”  He is not.  They are.

We can armchair President Trump’s responses all we want, but there’s a lot of hypocrisy going on here. Hillary Clinton waited two weeks after Benghazi to call that terrorism. If Trump had blamed Charlottesville on a video, maybe he would have gotten a free pass. President Obama waited four days during Ferguson while that city burned. And he was in Martha’s Vineyard having dinner, and when he came out then he blamed both sides, the looters and the police. When Black Lives Matter activists executed NYPD people and shot cops cold dead in the streets in Dallas, what did the president do? He didn’t condemn Black Lives Matter. Black Lives Matter got invited to the White House. And when he did speak about it, he goes, “It’s hard to untangle the motivations of the shooter, and we don’t want to assign blame from one kook to a larger national movement.”

Obama called terrorism “workplace violence.” So it’s hard to be lectured about word games from the left. And the Scalise shooter – this guy, a Bernie Sanders volunteer, targeted Republican congressmen with a weapon. No one blamed Bernie Sanders for that! But they want to lay this death at the doorstep of Donald Trump? It’s disgraceful. These same people who are mad at President Trump for saying “radical Islam” now all of a sudden want him to say “white supremacy?” It’s totally ridiculous.

Rush had this to say: 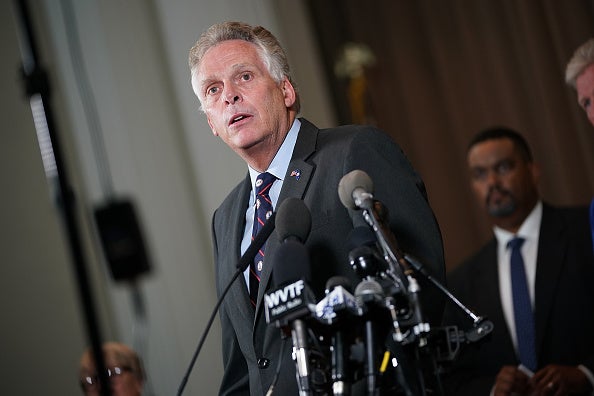 I’ll tell you something else. I think all of this is organized, folks. I think Terry McAuliffe, in fact, was trying to use this whole episode to launch his presidential bid and he botched it because he doesn’t have that big ability to get noticed. I mean, this is a pretty big deal. This is what Democrats do. This is what Clinton, Oklahoma City bombing launched the rebirth of his presidency. The Democrats see a crisis and found out how they can benefit from it while making people think they’re trying to fix it or solve it. And I think McAuliffe was doing the same thing.

Remember Rahm Emanuel, a crisis is a terrible thing to waste? I think not so much there are people that wanted this to happen but knew it was going to and so let’s see if we can milk it. And in order to milk it, it had to happen. And in order for it to happen, the police have to stay out of it. As the NYPD said, “It wouldn’t have had have happened here. We wouldn’t have let these two groups get within eyesight of each other. And we certainly wouldn’t let some renegade car enter this whole scene.” Somebody wanted it to happen, or somebody knew it was gonna happen and didn’t want it to stop because they wanted to try to capitalize on it

Occupy Wall Street. It’s the same bunch of people, just moving from protest to protest and march to match. It’s the same bunch of people. Now they do have their true believers, don’t misunderstand. I mean, there’s plenty of poisoned-minded college kids out there who have been brainwashed and literally poisoned with hate for their country, and they’re there. But I’m telling you, the organization for this is the same. It’s being done on purpose. 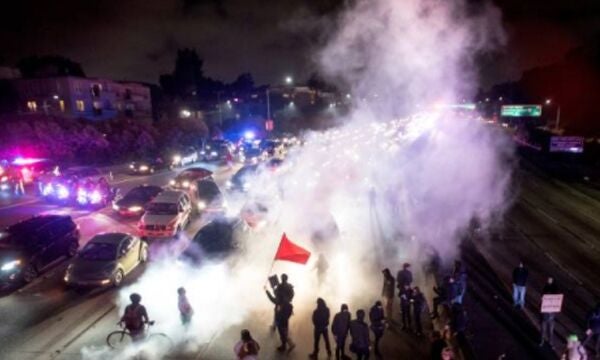 It’s not spontaneous. It’s being done on purpose. It is reported as though it’s all spontaneous. It’s reported as though, “Everything was peaceful and everything was tranquil — until some people decided to march in Charlottesville to oppose the tearing down of the Robert E. Lee statue, and that is what ignited the flame.” That’s the exact opposite of how this is all happening. It’s the left that is thoroughly organized and bought and paid for and is essentially on call, if you will.

They are on standby. Few people would probably know that or acknowledge it, even if told, because the way it’s reported makes it all look spontaneous, makes it look like… Well, just look at Indiana. Mike Pence signed into law the Religious Freedom Protection Act. Remember how immediately there was a massive statewide protest against Pence and the Illinois legislature as a bunch of racist homophobes, Christian zealots?

The media shows up — the national media — and they start knocking on business doors trying to find a business that would admit it would not cater a gay wedding. They finally — in some suburb of a suburb — found a 22-year-old daughter of a pizza owner, “I — I — I wouldn’t. I — I don’t think I would,” and they just descended on this poor pizzeria and this young woman, and they just painted her out to be the modern incarnation of evil. That was all planned and action waiting in the shadows for the go signal.

But it’s reported as though it is a national outrage! “The people of America are beside themselves at the idea we need to preserve American history! The American people cannot stand the idea that there’s a Robert E. Lee statue anywhere, and they side with the leftist protesters that want to take them down.” That’s the way it gets reported. You’re being lied to — we’re all being lied to — every minute of every day in the form of what they tell us is news, which is really just the narrative that is the advancement of the leftist agenda.

By the way, folks, Hillary Clinton has just given $800,000 from her campaign fund to the Trump resistance movement, which is what’s funding all of these rent-a-thugs. It’s all a left-wing movement, and it’s all organized.

Now we have a flashback.  It’s from The Daily Caller. “Charlottesville Mayor Mike Signer declared the city the ‘capital of the resistance’ at a rally held in January following the election of President Donald Trump.”

“The rally was reportedly attended by hundreds of citizens as well Khizr Khan, the father of a Muslim American soldier died in combat in Iraq, who chastised Trump for his proposed Muslim immigration ban in a speech at the Democratic National Convention.”

I’m telling you, folks, all this is organized. The mayor of Charlottesville has been getting ready for this ever since Trump was inaugurated. “January 31st, 2017, Charlottesville mayor holds rally to declare city capital a resistance.” That’s from the NBC affiliate WVIR. So don’t doubt me on this one.

“The act of violence was well-planned and was motivated entirely by the hate-filled ideology of the shooter, Micah Xavier Johnson. With several officers dead by the hand of a committed black nationalist, one might think the Obama administration may have considered the assassinations domestic terror and launched an investigation into groups associated with this ideology.”

But he didn’t. He did condemn the shootings, but he did not call out or even allude to the hateful views of the shooter. You know what he did you know? You know how Obama dealt with the murder of five Dallas cops? You remember? He blamed “powerful weapons” for the violence. Loretta Lynch, the attorney general, “exploited the tragedy to push for gun control and praise the cause of Black Lives Matter. No mention of Johnson’s ideology or ‘hate’ in was made in her statement.”

Now, Trump and his team have been urged to speak out against the so-called Alt-Right from the get-go. I never heard of this Alt-Right, by the way, until sometime late last year. And when I was first asked what it is, I didn’t know. I couldn’t answer it. I don’t know what the Alt-Right is. It seems to me the left has defined the Alt-Right as white supremacists and Nazis, so forth and so on.