Excerpt from ‘The Politically Incorrect Guide to Climate Change’: In 2009 NASA then–lead global warming scientist James Hansen endorsed a book called Time’s Up! An Uncivilized Solution to a Global Crisis, which ponders “razing cities to the ground, blowing up dams and switching off the greenhouse gas emissions machine” as possible solutions to global warming. “The only way to prevent global ecological collapse and thus ensure the survival of humanity is to rid the world of Industrial Civilization,” the book explains. “A future outside civilization is a better life; one in which we can actually decide for ourselves how we are going to live.”

Hansen declared on the book’s Amazon page that author Keith Farnish, “has it right: time has practically run out, and the system is the problem. Governments are under the thumb of fossil fuel special interests—they will not look after our and the planet’s well-being until we force them to do so, and that is going to require enormous effort.” 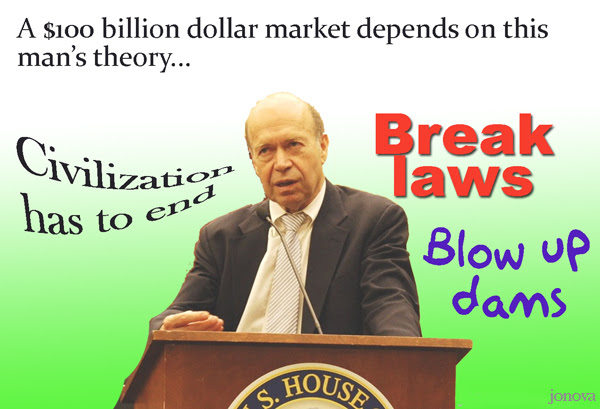 Remember, Hansen was NASA’s lead global warming scientist, in charge of the temperature dataset, endorsing a book suggesting the solution of calling for ridding the world of industrial civilization. Hansen is a hardcore activist who has been arrested multiple times protesting climate change. He has accused climate skeptics of “crimes against humanity and nature.”